Are you a fantasy author and ready to draw your own map? Then it’s time for some basics. That is if you want to make sure that, despite all fantasy, you want your rivers to flow downhill and avoid your heroes collapsing because they’re stepping out of a temperate forest into a scorching desert. As a former geologist, I want to use this blog to let you into the secrets of geologic world-building – for better maps in our future!

Today, we’re starting with the basics. But don’t worry! I’ll try to keep this light and engaging. At the end of this post, you’ll find some instructions for your own map.

Little Note: This is a repost of my author page Janna Ruth. I started this guide almost four years ago but never managed to post the next part. Hopefully, that won’t happen again.

Geologists and their sense of time – apparently a breaking point in relationships. When a geologist says, an earthquake is imminent that may be in 10, 50 or 100 years. Or it might happen tomorrow morning. They also tend to talk about the recent ice age as if it were a thing that happened a few weeks ago when it was over 10,000 years ago.

Mountains don’t appear in a human’s lifetime, not even in our species’ lifetime, though at least there would be some change. Equally, it takes just as long for mountains to disappear. The Scandinavian mountains for example predate Pangea and they are still rising high today though that plate boundary hasn’t been active in ages. So, if you are planning to make mountains appear overnight or older characters lament how the mountains used to be higher in their youth, then you should consider adding magic or alternative physics into your geologic world-building.

There are, however, geological processes that go quickly. An earthquake can lift or lower the land within the time of its rupture, though that’s only a few metres at most, and then nothing for a while. Volcanoes make whole islands appear from under the water during an eruption or they collapse into each other and form crater lakes. Any coast process is extra quick. Beaches can form easily during a human’s lifespan. At the same time, other coasts degrade and break away. With the accelerated sea-level rise, this becomes an even faster process. 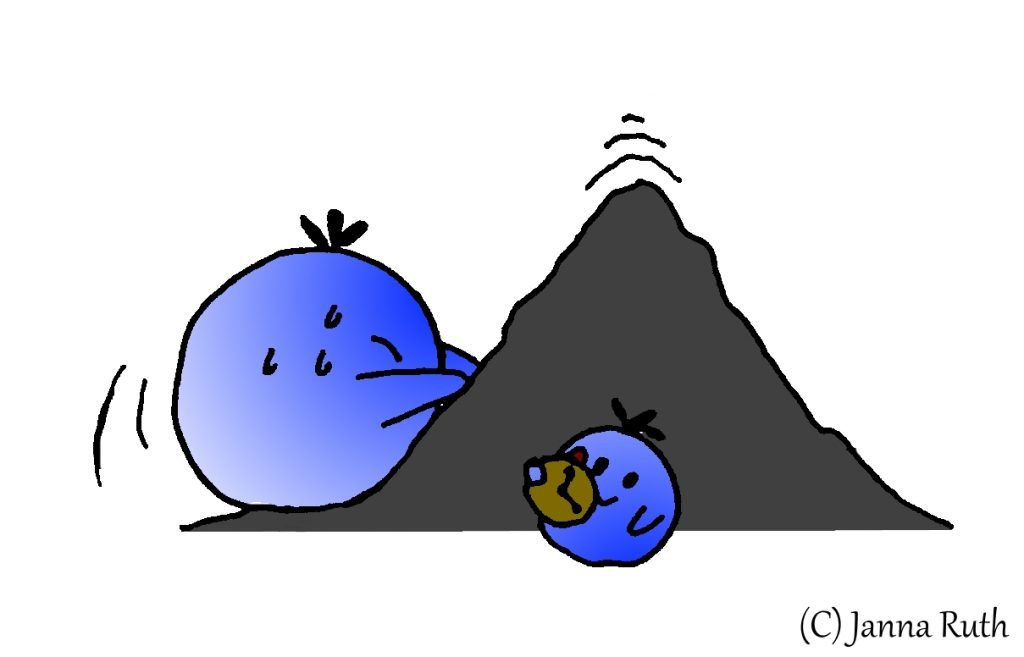 Let’s start with my favourite topic: plate tectonics. As you surely know, the Earth’s crust is broken into many smaller and larger plates. These plates swim upon the so-called asthenosphere, the upper part of the Earth’s liquid mantle. This process leads to plates colliding, tearing apart, or passing each other by. The mantle’s convection cycles are the main player in deciding which way the plates go, but we don’t want to look that deep into geology.

The reason I’m starting with plate tectonics is that the most impressive feature of any landscape, the mountain ranges, only form where two plates meet. Oceans, meanwhile, develop where a plate tears apart upon two conflicting mantle flow directions. One of the youngest rifts is the East African Rift, which also coincides with the Red Sea.

Plates can crash into each other or tear apart and drift away.

The second-most-important thing for geologic world-building is that plate boundaries are THE centres of volcanic activity and earthquakes. Ignoring hotspots like Hawaii, volcanos are only found along a plate boundary. The famous Pacific Ring of Fire, that spans from Japan through Indonesia and New Zealand to the Americas, contains 70% of the world’s volcanoes and hosts 90% of all earthquakes. The latter isn’t so surprising if you think of it. Smashing two objects together will always lead to shock waves.

About every half billion years, a supercontinent forms. Almost everyone knows Pangea, the giant continent where the dinosaurs roamed. Before Pangea, there was Rodinia, and scientists have already projected a future supercontinent. The Pacific will close eventually and acquaint the Americas and Asia. Going from Los Angeles to Beijing – possible with plate tectonics. If you want to know what these several states of plate assembly can do for your world-building, make sure to come back for the climate part. 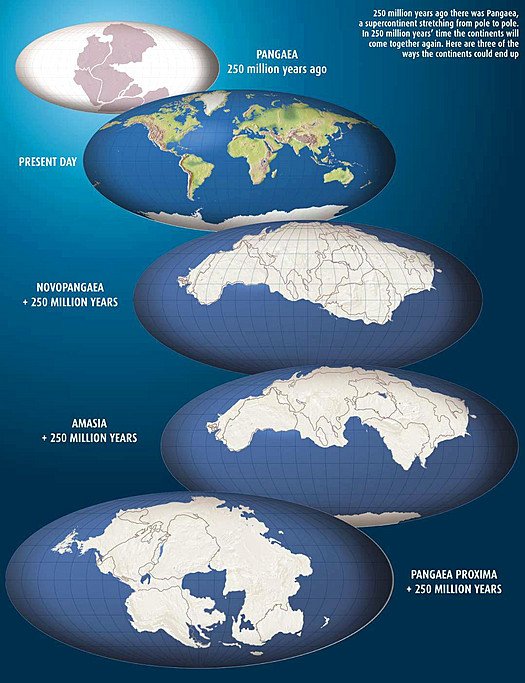 If you look at the world map, you’ll quickly notice that Africa and South and Central America fit together really well. Sure, the coasts look a bit different and everything is distorted, so it’s not exactly a perfect fit, but you know right away that they did belong together some time ago. Same thing with other continents (Australia, India, Antarctica, and Africa), but since they have separated a bit earlier, they have eroded more.

When I started studying geology, I planned to build an entire world from scratch. So, let’s have a look at it. On my map, you’ll notice that a few continents and islands fit together. Thalin, for example, still has this little peninsula that fits perfectly well into the East Coast of Fehnis. Sibenia, however, is just separating, while the islands of Werden and Taro could be assembled back into Fehnis’ West Coast with a little effort. 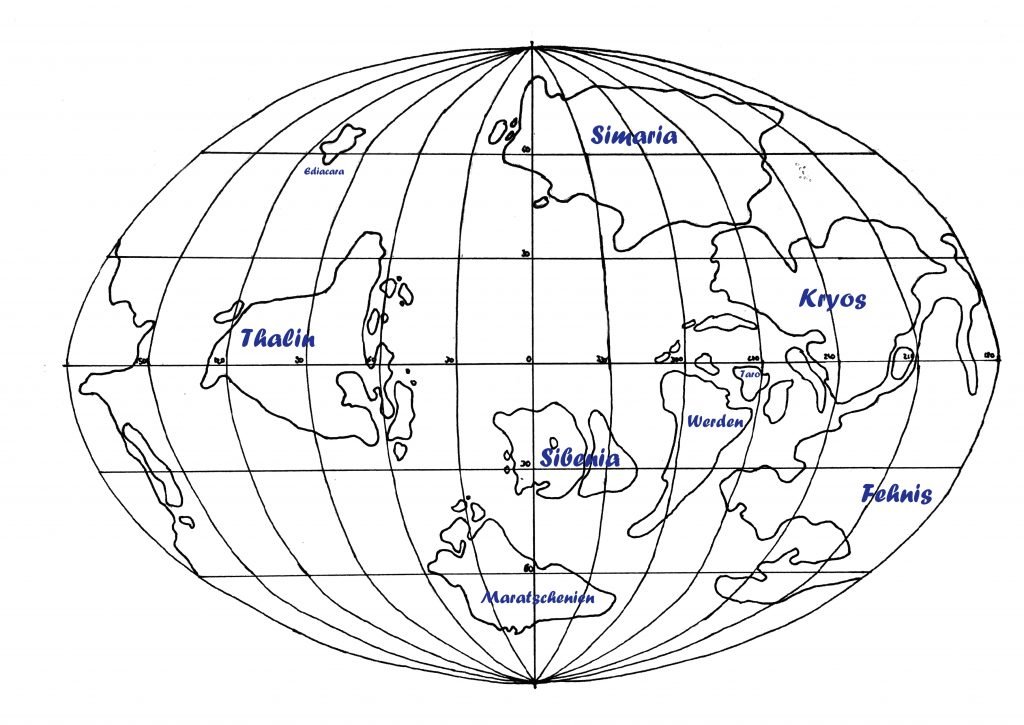 Building my own world – starting with some continents.

You can also see how the coasts don’t fit together perfectly. Parts are missing while others would be overlapping. That’s okay because remember: The tearing apart happens over the course of millions of years, while the sea level rise (and fall) and coast erosion processes work much faster. Thus, I distorted some of those parts to make the coasts look a bit more natural.

And now, it’s your turn for some geologic world-building.

How to build yourself some continents

Little tip: Since the earth is round, your plates and continents should reappear in the same spot on the other side, when they reach the map limits.This isn’t true for any disc worlds.

Disclaimer: Of course, fantasy worlds don’t have to follow our laws of nature, and authors don’t need to complete a geology course to build a working fantasy world. But, as with all writing tips: Know the rule you’re breaking!